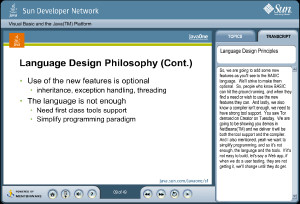 The JavaOne 2006 talks are now available online. Not only do you get the slides - you get the audio, and even a written transcript! All synchronized on auto play. Sit back and enjoy all the talks you missed! Especially those of you who couldn't make it to the conference this year. This resource is available free of charge for anyone - you just need a SDN (Sun Developer Network) login (also free).

It's pretty cool that written transcripts are provided. That lets you cruise through the talks if you're a fast reader and you don't want to sit and listen to the speakers. Somebody must have gone to a lot of trouble creating the transcripts - actually listening to all the talks and typing them in. In the case of our
Visual Basic talk, it's a bit entertaining though. John was joking that while Herbert is German, he would identify himself as Bavarian. The transcript says Liberian rather than Bavarian...

Not all talks (specifically, BOFs) are included. The Java Posse BOF for example. However, I recently got a link from a Java user group with Google video extracts from the show. See it
here - thanks to Peter Pilgrim. You can obviously get the full audio from the show at the Java Posse website.

You can find all the online sessions here.

I decided to go see a movie tonight. Things have been really hectic lately, so I was in the mood for mindless entertainment – and there were plenty of choices to choose from. But on impulse I decided to go and see An Inconvenient Truth instead. If you haven't heard about it, it is essentially a documentary from Al Gore regarding global warming.

Okay, I will admit that it sounded a bit boring. And if there's one impression the Republicans were able to hammer home to the public in 2000, it's that Al Gore is boring.

However, I found the movie energizing – I highly recommend it. (And don't just take my word for it – check out what the critics are
saying
). It was engaging, as well as compelling. Even those of you happy with the current U.S. administration should not dismiss this movie as political propaganda, or place it in the
Fahrenheit 9/11 category - it's not.

One of the points made in the movie is that a lot of people think global warming is simply a theory, and a controversial one at that. That's not surprising given media reporting on the topic. However, scientific publications on the topic universally agree on the global warming trend: it's not just a natural cycle as in past ice ages and subsequent melts. In media reporting, however, more than half(!) of the reports are sceptical. Sure, it's possible that this reporting imbalance is simply due to lobbyists at work. However, I suspect people want to hear that there's no problem. That absolves all of us of any responsibility. "An Inconvenient Truth" is a fitting title - it's a truth nobody would like to hear.

However, the movie presents irrefutable evidence of the trend. One thing is the temperature and CO2 graphs, but the side-by-side pictures of glaciers, evaporated lakes etc. over very short time intervals are hard to argue with. 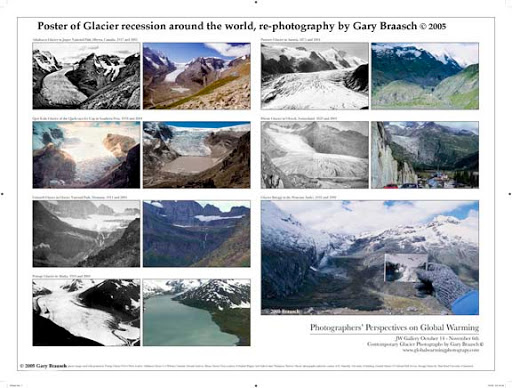 In the U.S. we now have an ad campaign against the conclusions in this movie, touting the benefits of carbon dioxide! That's right boys and girls, never mind the connection between CO2 and global temperatures. Carbon dioxide is good! It's natural. It comes from trees. Without it, life wouldn't exist! Thankfully, John Stewart on The Daily Show made fun of these ads. But the problem with comedy is that we laugh, then move on to the next show (in my case, The Colbert Report!) and fail to act.

This movie is pretty effective in trying to inspire people to take some action. Not only is it specific in what you can do, but it also has a pretty positive message. You might think global warming is all gloom and doom – and if we don't do anything, you wouldn't be all that wrong. But it makes a point I was not aware of: that we have averted a global environmental crisis in the past, so we can do it again.

Remember the ozone layer problem? I sure do. To this day I still use deodorant sticks because I remember the environmental campaign to avoid ozone-layer hazardous CFCs used in among other things, deodorant aerosol sprays that were popular at the time. What I had not heard until I saw this movie, is that this effort was successful and things are well within control today.

I was heartened to see that the movie was well attended. But then this is northern California, which politically is "out of touch" with the rest of the U.S. And, I suspect the people least likely to see this movie are the ones who need it the most, and vice versa.

It's very easy to ignore global warming. That's right. Click on the next blog story in your reader, perhaps something regarding Web 2.0, and forget all about it. But if you're reading this, chances are good you're in one of the top CO2 emissions countries causing the problems – and that makes you part of the problem. Ignorance is not an acceptable excuse. Watching the new Superman movie may be entertaining, but please consider assisting Superman in saving the world yourself! Watching this movie will make you think, and perhaps inspire you to do your part.

P.S. After posting this, I watched tonight's Daily Show and they announced that Al Gore will be the guest tomorrow night!

Today is my 10 year anniversary at Sun Microsystems. When I joined June 26th 1996 I started working on Sun WorkShop, Sun's C, C++ and Fortran IDE. It's been IDEs ever since, most recently Creator and now, Semplice.

Here's to another exciting 10!

When it rains it pours

I actually have pretty good reasons for my low blogging rate recently, although they're personal so I won't get into it here. But on top of everything, I've been moving to a new place, and with six years worth of accumulated stuff packing and cleaning was quite an effort. Not to mention all the small annoying things I have to deal with, like no internet service for a week (my brother who is visiting is going crazy! Especially when the cable TV hookup is going to take another full week, during the all-important soccer world cup!). Just yesterday I found out that the garbage company is refusing to establish service for me because they claim the previous tenant has not paid his bill. I still don't understand how that's my problem. Garbage company, indeed!