Python and Ruby are dynamically typed languages. We have a lot of heuristics in our editors to figure out the types - tracking assignments, analyzing your database migrations, etc - to help code completion, go to declaration and other IDE features work correctly. And Martin Krauskopf, who owns the Ruby editor now, has been improving the type inference for Ruby a lot lately.

However, there are cases where we just can't help. What if you're writing a brand new method you haven't called from anywhere, and you're trying to access methods on one of your parameters? We don't know the type of the parameter. In that case, NetBeans will provide "fallback code completion" - it will list ALL methods across ALL known classes in your project, libraries and current platform.

If you're looking for the documentation or parameters for a specific method - that's useful - after typing 2-3 characters you've typically narrowed the result set down to a handful of methods and you can pick the one you're looking for.

But what if you're not sure what the method is called? That exact scenario happened to me a couple of days ago. I was writing some Python code to do some string manipulation, and not being very familiar with Python I wanted to know what the equivalent of Java's indexOf method was in Python. I knew that the parameter in my method was a String, but I didn't have a way of telling the IDE that. I applied my usual workaround of adding a line above the current call:

and then I could invoke x. to see the methods available for a String. However, that's definitely not a good way to do it. What if I forget to remove my fake assignment? (Yep, I did that too. I couldn't figure out why my code wasn't working until I debugged and realized I was clearing out the parameter with a bogus assignment... Doh!)

The "obvious" solution for this is supporting type assertions. We've had those for a long time in the Ruby editor
(picture), and obviously for JavaScript using the @type and @param {type} syntax. And the PHP editor just added support for type assertions as well (more here and here).

I've just added this for the Python editor as well. But I've gone one step further which I think makes the feature much more obvious, and easy to use. In code completion, if the editor detects that you are attempting to complete on a simple variable (as opposed to for example a complicated expression), and the type of that variable cannot be resolved, then we add a new special code completion item at the top of the list. Here's what it says (and a more detailed explanation in the documentation popup): 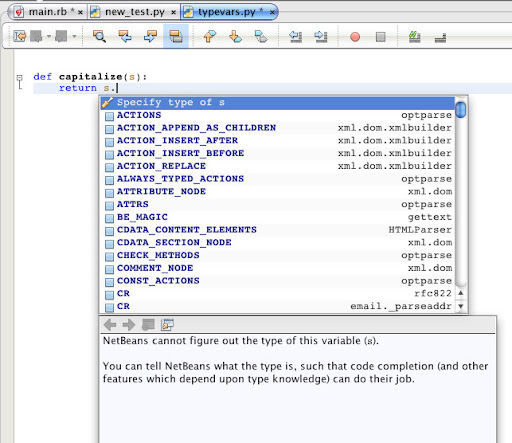 As soon as you press enter, the IDE will insert a special comment referencing the variable you were completing on, and automatically invoke code completion again to complete on the type statement: 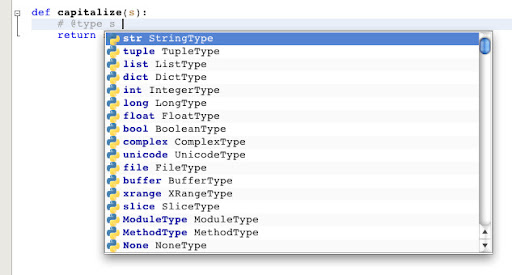 The contents of this list has two parts: First, it lists the pseudo-types for many of the core builtin types, like ints, strings, lists and tuples. After that it will list all the known types in the system, such as the user and library classes. If you select one of these and try code completing the original expression again, you can now see that the type resolver knows what to do: 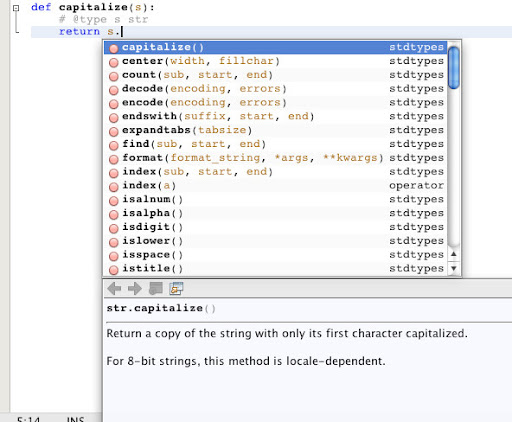 A couple of notes about this. First, note that the type assertions are just comments in your source. You can delete them - they are merely an aid to the IDE. Not only code completion uses these - go to declaration for example will also be more accurate if it is explicitly told the type of a variable it cannot figure out. You can also use multiple type assertions within a method in case the variable type changes during the method. This isn't the case with Ruby yet; the type assertions apply to parameters only, at the method level. But Martin has promised to look into this for Ruby as well so hopefully there will be full parity between the two editors shortly!

P.S. Just like in the PHP editor, mark occurrences and instant rename are type-assertion-aware:

Posted by Tor Norbye at 2:52 AM No comments:

In the 7.0 builds, we have a dedicated unit test runner for Python now. Running a file as a test, or running the test project action, will open a test runner with the output docked on its right hand side, instead of just the output window (click for full size screenshot): 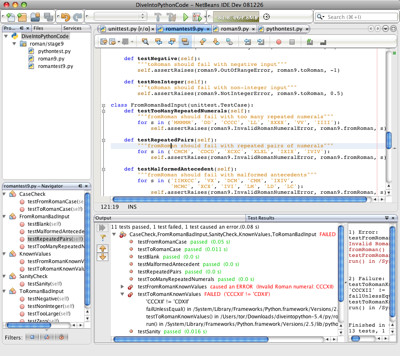 Here's the test runner itself:

What you want to see in the output is a single green line which says "All n Tests Passed", where n is hopefully a large number. But when one or more of the tests fail, you see something like the above. Running the Next Error action (Cmd-.) will jump to the next failed test, just like it normally jumps to the next error in the current output window, or the next task in the tasklist.

One thing to notice (and this is new in 7.0) is that we now include the failure message right there in the test summary for each test, so you don't have to drill into an individual test to see the failure message. You can also hover over a test and any output from that test is shown in a tooltip. You can also right click on tests and select "Run Again" to run just one specific test over again.

This is the same window as the one we have for Ruby. In fact, Erno, who wrote the Ruby test runner, has modularized the code now such that it's the same implementation for both languages - we just have language specific plugins to actually hook into the various testing frameworks. Currently, for Python we support the two builtin testing frameworks: unittest and doctest. The above screenshot showed a regular unittest run. Here's a doctest: 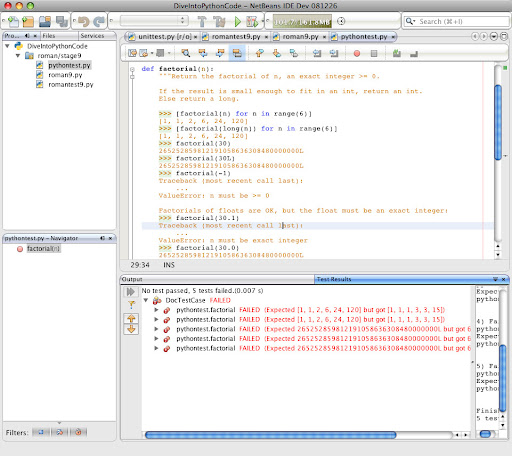 One important thing to note is that you don't have to instrument your code with any test running code. As long as you place doctests in your docstrings, or as long as you have any classes extending unittest.TestCase, the test runner will find them. All you have to do is run Test Project:

and when you have done that, both unittests and doctests are found and included in the same test run - here's both failing doctests and unit tests: 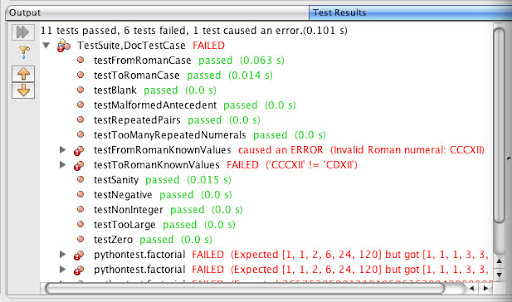 Once again, kudos to Erno for writing the excellent test runner support! And as usual, let us know of any problems.

P.S. Jean-Yves Mengant has also done some excellent work recently. In addition to some cool new quickfixes in the Python editor for NetBeans, he has just integrated a multithreaded debugger for Python! 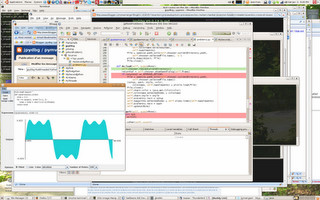 Posted by Tor Norbye at 4:51 AM No comments:

I've checked the Ruby code coverage code into the trunk now, so if you grab a recent daily 7.0 build, it should be there. I found a Windows-specific bug in the Python code coverage code as well, so grab a new build if you're on that platform.

I've had some fun with Java2D lately. Instead of the ugly coverage bars I showed in my screenshots a couple of weeks ago, the coverage bars now have proper gradients, drop shadows behind the text etc.: 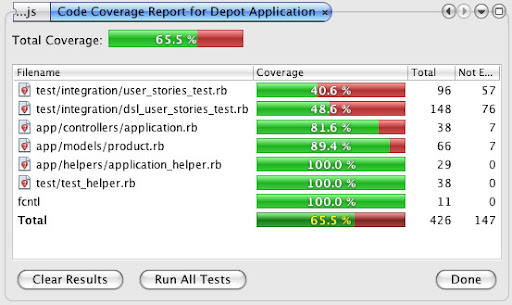 Another thing I added is a bar in the editor footer (while code coverage is enabled) which lists the coverage percentage for the current file, along with actions to quickly run the tests again, or bring up the coverage report, or clear the results, or finish the coverage mode. As well as warn you when your data is older than your code.

And finally, I updated the built-in and extra color themes to also have color definitions for the coverage highlights. Here's the Dark Pastels color theme with coverage data enabled: 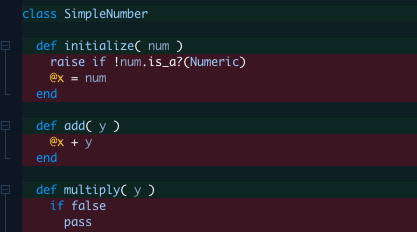 Please let me know of any problems while this code is still fresh in my mind :)

Posted by Tor Norbye at 3:37 AM No comments: