My music teacher in middle school had a great tradition. Every New Years Eve, at midnight, he would lift his stereo speakers up to his open windows, and on full blast, play ABBA's "Happy New Year" for the neighborhood.

I'm going to do the same thing here, on my little corner of the internet. Enjoy!

My kids have recently discovered ABBA through the Mamma Mia movie. Now they want to listen
to ABBA when we're driving around. No, don't pity me - it's a lot better than what they usually
want to listen to (I'm looking at you, Hannah Montana!). And besides, having grown up
in Norway I'm an ABBA fan at heart. When I was in 4th grade, all the girls in my class
liked ABBA, all the boys in my class liked Kiss, and then there was me - I sided with
the girls. And I'm still not ashamed of it. Despite some of their ridiculous outfits,
ABBA created some timeless melodies and had great sound production values that hold
up to this day.

Posted by Tor Norbye at 6:16 AM No comments:

In order to get code coverage to work seamlessly in the presence of the Rake build tool, I had to do some pretty ugly tricks - a lot of path manipulation that surely won't work on Windows. Rather than just getting bug reports, I'll need to debug through it to find the troublespots and fix them.

I don't have a Windows machine. I have a Solaris desktop box, and a Mac laptop. And since I don't have any short term plans to go in to the office (I work from home most of the time) I don't want to wait to look into this until my next chance to stop by a computer lab with Windows machines. 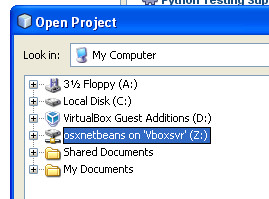 So, I decided to dust off the VirtualBox instance I installed and tested a while back. Back then, it worked fine - but was a bit painful to use. Actually, it was my fault. I never went and "finished" my installation. Turns out, after installing Windows on the virtual machine, there is some additional software shipped with VirtualBox that can be installed into Windows to make things work more smoothly.
For example, a special mouse driver makes the Mac mouse also work as the Windows mouse. There's support to share file systems. This is a huge benefit. I simply mapped my working source tree that I have already checked out, edited and built, as a new Windows drive! I didn't have to go and install Mercurial, Python, check out the whole NeBeans source tree, build it, etc. I could simply open up drive Z:, and run the NetBeans IDE from within Windows!

Another cool thing these special tools add is "seamless mode". I'm running the Windows applications running as if they are regular Mac applications on my Mac desktop! So I can debug through my Windows instance of NetBeans while at the same time having my Mac mail and instant messaging programs part of the screen. Look at the below screenshot (click for full size) -- I have the Mac doc on the left, and the Windows doc on the bottom - as well as a mixture of Mac and Windows (uhm) windows on the desktop! 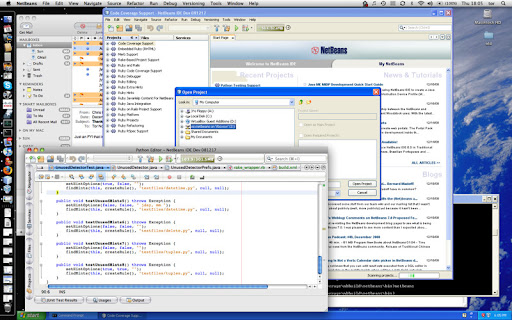 Wow. Installation was flawless. It's working beautifully. And it's free. And it's open source. Wow. Oh, and it runs on many other platforms as well.

As I wrote this blog entry I looked up the VirtualBox home page to I could link to it, and I discovered a news blurb:

Sun today released VirtualBox 2.1.0, a major update with exciting new features: among them better 64-bit support, hardware virtualization on the Mac, 3D acceleration, easier networking on Windows and Linux plus full VMDK/VHD support including snapshots. See the ChangeLog for a detailed list of changes.

I just installed it and took it for a quick spin, and things are looking great.

P.S. One little tip: Installing the Guest Additions into Windows is easy - there's a menu item in the Device menu, "Install Guest Additions...". I tried it, and it popped up an installer inside Windows. But since I was in the middle of applying service packs to Windows, I dismissed it so I could deal with it after my service pack upgrade reboot. But when I tried it later, it didn't work! Uh oh, is this incompatible with service pack 3 I wonder? Nope, it's much simpler than that. What "Install Guest Additions..." does, is mount a new CD-ROM into Windows. I'm guessing Service Pack 3 turns off auto-run! Probably a security thing. So all I had to do was open the computer folder, and click on the CD-ROM there to run the installer.

Oh, one other tip: The default RAM allocated to the virtual machine is pretty small: 512Mb. In the Settings for the machine you can crank it up bigger - I set it to 2 Gb. That makes the machine run quite a bit faster under load since it's not continually swapping to disk for virtual memory.

Posted by Tor Norbye at 7:17 AM No comments:

The deadline for submitting talks for JavaOne 2009 is almost here. I was on one of the review committees last year, and saw many common patterns for rejected talks. I wrote these up in a blog entry last year - "Why Your JavaOne Submission Was Rejected. You might want to skim through it again while reviewing your submissions one final time!

Also, there's a new book about develping Ruby and Rails code with NetBeans, written by Chris Kutler and Brian Leonard. I reviewed some of the content and it looked very good. There are a lot of books on Ruby and Rails, but this book really shows you how to do things effectively with NetBeans. Mastering your tools is one of the best gifts you can give yourself as a developer (or as a craftsman of any craft, I think). I gave this advice a while back when I was interviewed for the JavaOne daily newspaper. Highlights from these interviews were recently compiled in this article, containing advice for students from a variety of developers. When this article was discussed on DZone I was surprised to see some people still talk about IDEs as something to be avoided until you know what you're doing. I think precisely when you are new to Java should you use an IDE to help you explore IDEs, to pinpoint errors are you're typing code rather when you try to run javac from the command line etc. The same goes for Ruby, Python, PHP, and so on. The IDEs let you explore APIs using code completion and go to declaration, they present important operations in project and execution menus, quickfixes and semantic warnings pinpoint errors in your code, and so on. If you're still writing code with Notepad, you're missing out.

Posted by Tor Norbye at 9:29 AM No comments: 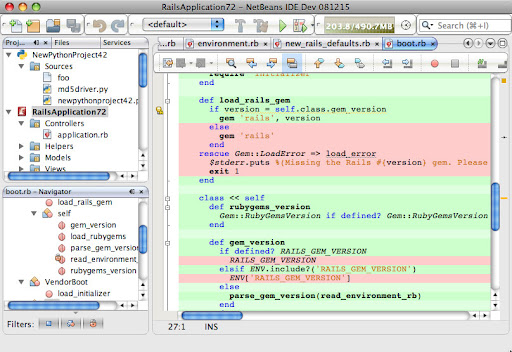 There are a couple of key points about the code coverage support:

I didn't think a screenshot really described this feature well, so I recorded a couple of quick sessions where I use the feature:

Here's a couple more images if you have problems loading the videos: 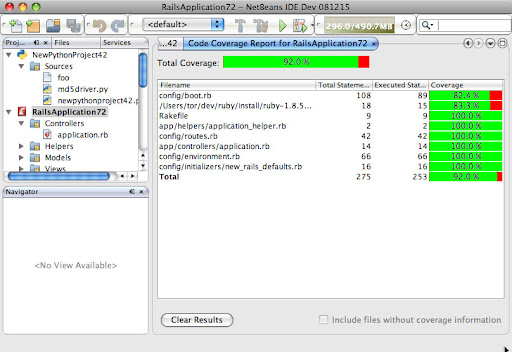 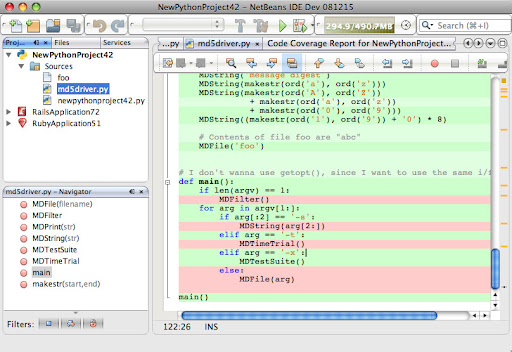 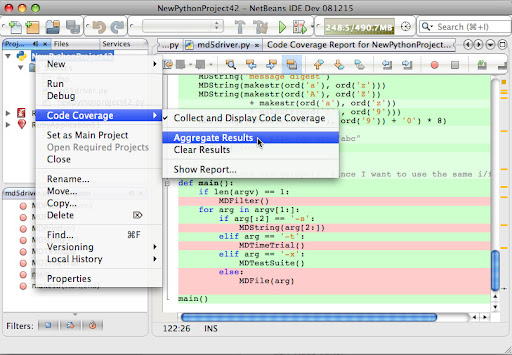 The Python version is already in the 7.0 builds. The Ruby support isn't integrated yet; it probably needs some tweaking to make it work on Windows.