Ruby Screenshot of the Week #25: require_gem

There have been a number of releases lately. Rails 2.0 shipped. NetBeans 6.0 mostly supports it. There were a couple of changes, such as the scaffold generator's parameters changing meaning, and the new shorthand migration syntax, which affected NetBeans. I've committed changes to 6.1 to support these, so grab the latest if you're wanting complete Rails 2.0 support. However, note that we're in early 6.1 development so there's some big potentially destabilizing changes, such as a new platform manager which lets you choose per project ruby interpreters, configure separate gem repositories and so on. I'll post more about this when it's done. You don't need to upgrade if you're just wanting to use Rails 2.0 - nearly everything in NetBeans 6.0 works just fine.

JRuby 1.0.3 also recently
shipped, and I've just updated NetBeans 6.1 to use it. JRuby 1.0.3 lets you run Rails 2.0 without needing to install the optional jruby-openssl gem.

I just noticed that RubyGems 1.0 has
shipped. One of the changes in RubyGems is that the require_gem method, which has been deprecated for a while, is now gone - so you have to update your code appropriately. require_gem was used by previous versions of Rails, so many boot.rb files still reference it.

I just added a checker for this:

It's not just a warning - it's a quickfix:

The "Show More information" fix opens the browser on the release page for RubyGems 1.0 which briefly mentions the require_gem removal. If anyone has a better URL to an official and mostly permanent page (e.g. preferably not somebody's blog) discussing this change, I'd appreciate the link.

Ruby 1.9 is getting closer. Charlie recently
pointed out to me that they recently
decided that retry statements will as of Ruby 1.9 only be allowed inside
rescue blocks. Thus, we now have a hint to look for problems of this sort.

If anyone has
any ideas for other Ruby 1.9 migration issues, please
let us know!

Updated a few hours later: Dr. Nic pointed out that require_gem can't
just be replaced by gem and showed me how the code needs to be morphed. I've updated the
quickfix to do The Right Thing now - thanks Dr. Nic!

Posted by Tor Norbye at 4:17 AM No comments:

First of all, NetBeans 6.0 (final) was released this morning. Go get it!

So let's talk about 6.1 :) I just updated the quickfix infrastructure such that we can automatically generate previews for how the hints will modify the source. I've also added some new hints.

Let's start looking at the user.rb file in the sample Depot application. If I place the caret inside one of the if blocks, a lightbulb appears:

NetBeans offers to replace this if-block with one where the "if" is a statement modifier. This idea came from the excellent "Exploring Beautiful Languages"
blog
by Luis Diego Fallas, where he implements NetBeans Ruby hints -- in Scala!

Here's the new preview functionality in action; instead of just applying the fix I invoke the Preview and get the following dialog which shows what the fix will do: 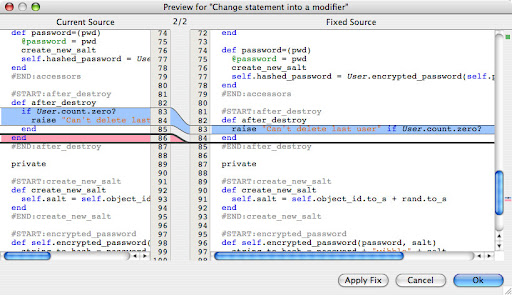 Here's another method from the same file:

Obviously, we can apply the same "convert to statement modifier" here, but look at the first suggested fix:

and we can apply the other conditional cleanup as well to end up with a much simpler statement:

There is one more recently added hint: Check for accidental assignments.

At first I got a lot of false positives for this hint, since many Ruby programmers seem to like to intentionally assign in their conditions. But then I updated the rule to only complain if the variable being assigned to had already been seen in this scope, and that seems to do the trick perfectly. Newly assigned variables are intentional side effects of the assignment, and assignments to existing variables are likely bugs and should be avoided.

Posted by Tor Norbye at 3:21 AM No comments: